"Vows" is the first episode of the second season of Dollhouse and the 14th episode overall. It was written and directed by Joss Whedon. It aired air on September 25th, 2009.

Picking up a few months after the first season finale, Echo now more frequently glitches her past "imprints" following the composite event induced by Alpha. On a long-term engagement, she seduces and weds a wealthy and charismatic British businessmen, Martin Klar, an arms dealer who Agent Ballard never closed the case on as an FBI agent. While the engagement is compromised after Ballard is spotted with Echo's identity, Roma Klar, after she experiences some head trauma he is able to trigger the emergence of her past personalities, particularly the thug from the Chinese restaurant. Echo manages to bring down Klar and he is brought to justice. In the Dollhouse, the blank Echo confesses to Paul that she remembers everything and wants help "saving" her fellow Actives. He promises to help her do this, and accepts Adelle DeWitt's offer to become Echo's new handler.

Claire Saunders struggles with being an Active and makes Topher the target of her aggression. She begins second-guessing her own identity, and purposes, and finally breaks down; the fear of dying; while not "real", Claire is as attached to her memories and identity as anyone. Boyd attempts to help Saunders with her crises. He suggests that Adelle would authorize the scar-treatment program used on Victor, and perhaps even return her to her "real" identity, but she declines. Boyd invites her out of the house on a date, but she explains the various phobias which Topher made integral to her personality. Boyd suggests she try and move past them, like real people do; unable to find peace within the Dollhouse, Claire finally tries to find herself outside, and escapes.

The episode starts with Echo getting an imprint. Paul Ballard is seemingly concerned at whether Echo can handle this, but Topher reassures Ballard everything will be fine. During the imprinting process, Topher experiences glitches with his computer and suspects it is Dr. Saunders who is messing with him and goes to sleep. Adelle and Boyd discuss the dangers of keeping Ballard on staff, but Adelle seems unfazed. Echo is then seen on an engagement and is getting married.

Topher wakes up and finds that there are rats in the cupboard placed in there by Dr. Saunders. Topher calls Dr. Saunders, who accuses Topher of faulty imprinting and Topher quickly rebuffs this saying that his work is perfection and her "mental health" is her fault. Boyd then walks into the room to speak with Dr. Saunders, handing in a report about Victor and his plastic surgery to mend his scars. Dr. Saunders does speak up about how Victor was given the surgery and not her, but says she is fine with it. Boyd asks her out to dinner but Dr. Saunders declines, saying she is scared of open spaces and it is just how she was made. Boyd rebuffs this saying it is an excuse and ultimately we are all a series of excuses.

Echo returns to Paul after spending the night with her "husband". It turns out Ballard is using Echo as an undercover agent to finally put the people away that he missed during his time at the FBI. Echo is then brought in for a check-up and whilst under examination by Dr. Saunders, she recalls an engagement they had together. Echo calls Dr. Saunders Whiskey and they re-account the details that sent Echo to the position of number one doll. In Adelle's office, Senator Perin is investigating the Rossum Corporation for withholding medical advancements. Boyd immediately suspects Ballard, but Ballard disregards the accusations. Adelle then offers Ballard the position of Echo's handler given how much he cares for her, despite how unhealthy it seems. Meanwhile it seems Echo has been found out. There have been photos taken of her and Paul Ballard drawing suspicion towards her.

Dr. Saunders tries to seduce Topher while he is trying to sleep. Dr. Saunders hypothesizes that she was programmed to hate Topher so they would fall in love, in a sense something that is more real than a "love slave". Topher declines Dr. Saunders' sexual advances and in a heated exchange, Topher reveals that he had not programmed her to hate him. He only programmed her to disagree with him so that they would not miss "something" that could potentially hurt the dolls. The decision to hate was made only by Dr. Saunders. Dr. Saunders subsequently breaks down under this information and Topher tries to comfort her. It is revealed Dr. Saunders chose not to find out who she was in "Omega" because she doesn't want to give the body back to the original personality, thereby "dying" as Whiskey/Saunders.

Echo's husband confronts Echo with the picture of her and Paul Ballard. She is struck in the head and this seemingly triggers her past imprints. As she is about to talk herself out of her situation she states that she is Eleanor Penn (from "Ghost"). She is subsequently confused about her state of mind. Echo's husband then goes to make his arms deal, bringing Echo with him. Ballard follows her and calls Topher who notices spikes in her feed and is alarmed that her handler did not call it. Ballard goes in by himself and then accuses Echo of failing the engagement and strikes her several times, trying to make her recall the "fighter" imprint from "Man on the Street". They are able to disable all the guards and stop the arms deal. Dr. Saunders leaves the Dollhouse, leaving only a note for Boyd saying "I'm running out of excuses". Victor's scars have fully healed and he and Sierra are seen holding hands walking together. Echo reveals to Ballard that she can recall her imprints, even hear them, but she knows none of them are her real self and she asks for help from Ballard. He then takes up the offer from Adelle and becomes her new handler.

"[T]he episode is superb: funny, suspenseful, sexy and willing to kick around more than a few Very Big Ideas. Combined with the series’ terrific “lost” episode (“Epitaph One”), “Vow” roughly triples my investment in this series’ fate."
―Ain't It Cool Recap
"This might not sound like good news, but it is -- the first episode of the second season of "Dollhouse," is very relaxed. Not a whole lot happens, but this actually could be a good sign. The season premiere, "Vows," (...) feels like it was made to set up the entire season, and not just to grab attention."
―Pioneer Local Recap
"[W]hereas I spent most of the first season completely frustrated by a show that just felt like an uncharacteristic misfire from Joss Whedon, "Epitaph One" and now "Vows" are strongly hinting at something worth a bigger investment. Dollhouse is still not 100% there yet, as far as truly being appointment TV, but the positives are beginning to take root."
―IGN Recap
"[C]ertainly one of the show's better hours and representing a strong focused direction."
―HitFix Recap
"All in all, I'm still cautiously optimistic about the future of Dollhouse going forward — and I can't wait to see some of the hints about the future in "Epitaph One" start to pay off a bit more as the season unfolds — but "Vows," as a season opener for a show that barely scraped a renewal, is, well... problematic."
―io9 Recap
"[T]he show immediately dives into the muck of confused identities and bruised psyches, and expects us to get up to speed quickly. This is not a complaint; quite the contrary, it’s a rare thing for TV creators to have that much respect for a viewer’s intelligence and it’s an excellent sign that Dollhouse intends to move full speed ahead, torpedoes be damned."
―A.V. Club Recap
"So yeah, call me a bit underwhelmed by this first episode of season 2. I’m not saying I’m ready to walk away from the series. There are so many reasons to hang on but I’m hoping they’ll slow the pace down just a bit and build up a little more momentum before they continue pushing the overall story arc forward."
―Cinema Blend Recap
"A lot of haters didn't like this series as much as Whedon's previous ones. I figured the series would be the sort to grow into its own, and I'm seeing evidence of that in this episode."
―TV Squad Recap
"Saunders' struggle to accept that she's really Whiskey - and that she'd rather stay Dr. Saunders then "die" by going back to her true identity - was really well-played by Acker, and the sort of story that typifies "Dollhouse" at its best. Eliza busting out kung fu moves or Dichen Lachman in a Jackie O pillbox house are fun and all, but where "Dollhouse" really gets gripping is when it's asking these existential questions about identity and the soul."
―Alan Sepinwall Recap
""Vows" (...) is clearly an enthusiastic effort to solidify Dollhouse as a series that isn't primarily about this week's adventure. The compartmentalized episodes of the early first season were duds compared to what came later, because Whedon realized that the weekly assignments, while necessary to engage new and casual viewers and to create new conflicts, needed to be leveraged most of all to push the larger stories enmeshing the characters. As a result Whedon is finally navigating in the waters he knows best: building a long-term story through a carefully produced show that's still fun to watch every week."
―About.com Recap
"All in all, “Vows” was a good episode, one with some very nice touches — Acker and Kranz’s tete a tete, creation versus creator, was particularly well done — and definitely better than the whole middle chunk of the first season. But it didn’t open the second season with the kind of redefining bang I was hoping it would."
―EW Recap
"Perhaps this show can be turned around after all."
―The TV Critic Review
"The season-two premiere of Dollhouse kept the momentum from its strong finish last season — (...) Lots of meta, moral ambiguity, philosophical questions, great dialogue, memorable quotes, funny asides, awkward interpersonal tension, significant character development and some sort of twist to propel the story forward. Oh… plus, Fozzie Bear."
―Paste Magazine Recap

The episode was watched by 3.417 million viewers with seven days of DVR viewing were factored in, and it received a 1.5 Live+7 Rating/Share in the 18-49 demo, which is a 50% past airdate demo increase via DVR (tied with Smallville, that's the biggest percentage increase for broadcast TV shows of that week). 33% of all demo viewing happened past airdate via DVR, that's (again tied with Smallville) the biggest percentage for broadcast TV shows of that week.

Overall "Vows" had 914.000 DVR viewers past its airdate. 26.7% of all viewings of "Vows" happened via DVR and past its airdate, that's the biggest percentage of past airdate DVR viewing for broadcast TV shows of that week. 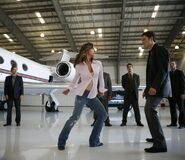 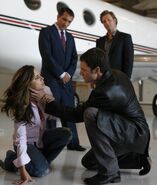