"True Believer" is the 5th episode of Dollhouse. It was written by Tim Minear and directed by Allan Kroeker, and it aired on March 13th, 2009.

"True Believer" was the seventh episode produced. Tim Minear, the writer of the episode, described his involvement throughout the process as "Pretty involved. I prepped it with my old friend Allan Kroeker, I was on set much of the time, and I was in the editing room until it was done."[2]

Tim Minear said about the genesis of the episode: "Well, Joss wanted to do a cult episode. The only real edict was that the culties should have a point of view -- that they shouldn't just be crazies. In fact, they should be right. I liked that notion. I don't recall who came up with the "blind Echo" angle -- I think it was Andrew. Anyhow, we were behind in scripts and I just said "let me do it." Took what little we had and worked it out on my own. In terms of my thought process I wanted to make sure there was a real reason why only the Dollhouse could do what needed to be done in this instance and I wanted the story turns to be rooted in the Dollhouse premise so I used the sci-fi angle to make a scientific miracle."[2]

Minear also commented on writing Echo/Esther Carpenter: "They could create a real woman who had really experienced a divine vision. And the fact that she was really blind proved that she wasn't lying. That's why she could recognize Sparrow through touch because the vision she experienced was no lie. Granted, Topher put it in her head, and we saw the 3-D model of Sparrow's head and understood how this was accomplished, but to Echo/Esther, all was true. So when Sparrow knocked the cameras loose and her vision was restored, this was also really a miracle... to her."[2] Writing Topher and Claire was one of Minear's easier writing endeavours: "I think it took me as long to write the Topher/Saunders stuff as it took to type it. Kind of a snap, actually. I also like writing for Adelle. And I have affection for Boyd."[2]

"True Believer" features a few Drive-alumns (one of Tim Minear's previous shows) like Brian Bloom and Mark Totty. Their casting has been partially influenced by Minear: "Oddly, I wasn't really thinking of Brian when I was writing. I was kind of writing for Jeremy Renner (Penn from “Somnambulist” [Angel]). When he wasn't available, I heard that Brian had been submitted. Joss and I both thought he would be great. In the back of my mind, I was kind of thinking of Mark Totty for Agent Lilly. And I asked for casting to bring him in. I cast the episode myself."[2]

Filming took place in Ventura County, at "a rugged little farming commune".[3] Eliza Dushku recalls the filming on the cult compound: "[W]e were shooting up in Piru, which I don't know if anyone knows, but it's sort of up near Santa Clarita. We were on this cult compound, and we were all dressed very Amish or something. It was this interesting wardrobe, and we were all gathered around this little television with like crank knobs, sitting on a stool out in the middle of nowhere [on election night] watching Obama take it. We will all remember that for sure."[4]

Echo is imprinted with the persona of someone with blind faith--who is also actually blind and an unknowing spy for the government--to infiltrate a dangerous cult led by ex-criminal Jonas Sparrow, while Claire Saunders and Topher investigate an unusual development between the blank Victor and Sierra.

Eliza Dushku mentioned that the imprint in "True Believer" was one of her favorites of the first season: "I did love playing the blind cultist in an episode from Tim Minear, who is one of my favorite writers, who has been with us since the Buffy days, and Angel as well. They implant cameras into my eyeballs and send me into a cult compound as a true believer to get intel on what’s happening inside. And yet, because we’re not spies, because we’re not in the loop, so to speak, I just go in there as a pure true believer. And that was very interesting."[5]

"It’s only five weeks in, but we could all use a shakeup."
―Zap2it Recap

"The fifth story ‘True Believer’ is a strange mix of the good, the bad and the tantalising of this production. It had the potential to be exceptionally interesting, but blows it all towards the end in a somewhat lob-sided third act."
―Den of Geek Recap

"Besides being one of the show's strongest episodes yet, "True Believer" was also extremely topical. (...) More important than that is the quality of this week's episode. Of the five episodes we've seen thus far, "True Believer" had the best balance of standalone one-off and serialized arc storytelling."
―TV Guide Recap

"All in all, “True Believer” is a pretty good episode and a nice ride all the way through."
―The Independent Comics Site Recap

"I loved the "B" plot, about Victor's erections, and what they mean, and what to do about them. The livestock are getting out of control! And I sorta liked the "A" plot, a lot more than I thought I would."
―io9 Recap

"This episode started off with more conviction and clarity than any previous episode but then slowly became more convoluted and confused as it went on."
―The TV Critic Review 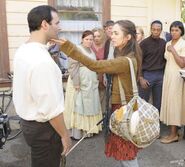 Add a photo to this gallery

Retrieved from "https://dollhouse.fandom.com/wiki/True_Believer?oldid=14662"
Community content is available under CC-BY-SA unless otherwise noted.