"Stage Fright" is the 3rd episode of Dollhouse. It was written by Maurissa Tancharoen and Jed Whedon and directed by David Solomon. It originally aired on February 27th, 2009 on Fox.

Echo provides protection to Rayna Russell, a pop star, by becoming her backup singer. Rayna has a very obsessive fan who wants to kill her, and Sierra gets imprinted as Rayna's number one fan to capture his attention. Meanwhile, Ballard's investigation takes a wrong turn when Lubov sends him into a trap which Paul barely survives. Lubov himself turns out to be an active of the Dollhouse, Victor.

The show starts showing a girl in a cage, who turns out to be the performer Rayna Russell. It's opening number for her concert and she begins a dancing number with back up dancers. An accident occurs with some of the pyro-technics, burning up one of her backup singers and she's rushed off stage by security. The camera pans to a red-headed young man with a smirk on his face.

At the Dollhouse, Sierra and Echo begin to socialize sparsely after a workout on the treadmill, while Boyd is chastised by Dr. Claire Saunders for his injuries, and is suggested to take a week off for recovery. She certifies his release when he mentions the previous killing from the previous episode in regards to Alpha.

Lenov, later to be revealed as an imprinted Victor, tries to break into Paul Ballard's apartment before being distracted by Mellie, his next door neighbor. The two of them make a bit of small talk and Victor leaves a business card with Mellie to give to Paul for them to meet up before parting ways.

Adelle DeWitt has an inpromptu meeting with Rayna's manager, Biz. While normally a client, he is in the Dollhouse on business to save Rayna from a possible murderer. Aside from the burned up backup singer, there was another accident, prompting Biz to decide he needed to intervene. Rayna's dislike of bodyguards for her "artistic" interests and abilities means she needs someone close to her that she can trust, such as the talents of Echo, seeking to fill the position of backup singer. As Jordan, she auditions for the part on their tour, and Rayna quickly makes the order to get her working.

Topher and Claire get into a verbal argument about Echo being sent out on a high-risk engagement. Topher explains that Echo's persona is a struggling singer who just got her first break. Her parameter however says she must protect Rayna, instinctively and unconsciously. She's built to want to protect Rayna while otherwise keeping up with her lifestyle as a singer first and foremost. As backup, however, Sierra is also imprinted, revealed to be Rayna's number one fan to distract the possible murderer. Echo is meanwhile in rehearsal for dress and vocals. She's informed that Rayna's fan mail since the accidents started happening goes strictly to the police now for them to sort through for the possible criminal. Rayna gets stressed out during rehearsal and leaves, interrupting Echo into joining her for a soundcheck.

Paul meets up with Victor at a house meeting about the dollhouse. Victor reveals that he knows about human traficking but nothing about the possibilities of a brainwashing organization. And that he's been brushing up on Paul for information and hopeful blackmail to use against the FBI agent. Interestingly, Victor, as Lubav, throws in that he wishes a dollhouse did exist. When asked by Paul, he explains it'd be so he could throw all of his personal problems away, a known reason in the future episodes as to why there are volunteers for the actual Dollhouse. Victor obviously trying to deal with his Post Traumatic Stress Disorder before he signed up, as to be revealed.

At the latest venue, Rayna is introduced to Audra, her number one fan, imprinted into Sierra. And elsewhere backstage, the red-headed gentleman appears handicapped before sneaking into a separate room and setting up a rifle of some form up in the stage lighting booth during the concert performance. He promptly leaves and the scene cuts to an after-party. Echo's parameter begins to show itself as she doesn't like the feel of being surrounded by people. Rayna gets into an argument with Biz over the fact that she's forced to interact with an obsessed fan she wants nothing to do with. Putting on a front, she deals the social charm out and hangs out with Echo and Sierra before Echo's parameter causes her to shove off a photographer over a guard railing who'd hidden his camera much like someone would hide a gun in their inner jacket pocket.

Victor tips off Ballard into investigating an old and shut down hotel that was the biggest hit back in the eighties. Ballard takes the tip and makes his way over to take a look and gets ambushed by three men from the Russian Mafia. Able to hold his own for the most part, he ends up shot and injured in the process of incapacitating the mobsters.

Boyd is separately investigating Rayna's fansites hoping to find the specific would be murderer. Echo goes to hang out with Rayna in her dressing room, coming across a huge amount of personal affections in the shape of dozens upon dozens of sent orchids, and fanmail that she questioned how Rayna got. Afterall, the police should have been receiving the mail, and the latest one in her hand was from the previous night. Rayna is revealed to have been communicating with the killer, setting up her own death. Echo tries to intervene and realizes that Rayna has a death wish. Running off to find Biz, Echo rushes onto stage and grabs a stage light and redirects it throughout the crowd, pinpointing and blinding the killer as he goes for the kill before rushing off from being caught. Rayna flips out on Echo for stopping her show. Echo tries to reason with her, saying that the fans didn't want her dead, but Rayna reasons that the show-stopping event itself would be a great finish to keep her alive in their minds for being there to witness the event. Elsewhere, the killer kidnaps Sierra as she goes to be backstage with Rayna.

The killer sends off a video message to Rayna, showing Sierra as his captive, with a gun in hand ready to kill her. He expresses annoyance at the fact that she is supposedly Rayna's number one fan, and not him. He relays that he wants to kill her, and continues to express that Rayna's ideal of wanting to die is a fact, before also letting it be known to both Echo and Biz that they have contact with each other so they can arrange a meeting to finish their ordeal together. Rayna runs off and Echo stays behind with Biz before he triggers her parameter that she should be with Rayna, and Echo rushes off after her.

Dominic informs Adelle DeWitt of the situation of the kidnapping, which amuses her by the parameter set to be a distraction for the killer. This worked well, as she is antagonized by the killer into singing on video footage for taking the spotlight away from him being Rayna's number one fan. Echo goes once more to try and reason with Rayna about the implications of the matter. Apathetic to the situation, Rayna avoids it to the best of her abilities before Echo seems to act out of her persona and attacks Rayna, knocking her out, insisting that she will help Sierra because friends help each other out. She then contacts the killer to meet up at the concert hall so they can finish the deal.

Dominic attacks Topher about the situation, to which the latter explains that while she is programmed to protect Rayna, the situation of a persona can be adjusted in a light that may not be expected by the onlookers. In this case, the literal threat of death as a reality, and not just a stage act for fans to see, shocks Rayna into wanting to live. Boyd gets into position to shoot the killer, but his orders to shoot are held off by DeWitt to let the engagement play out. Echo drops Rayna off the railing as a distraction, as the singer is actually attached to a short rope so she won't actually fall. This is enough of a distraction for the killer that Echo gets the upperhand and overpowers the man, knocking him out. The engagement is done and Echo and Sierra are seen chatting together about the encounter before being separated by their handlers and being taken back to the dollhouse for the treatments.

"Stage Fright" was the fifth episode produced, with filming taking place in October, 2008. The scenes depicting the concert were shot at "The Music Box".

Kimberly Cole, who wrote Rayna's songs in the episode and played a backup-singer, said about working with Joss Whedon: "Actually, the funny thing is he wrote the script but his brother and his partner from the Sing Along Blog were working on this episode. So I got to work with him a little bit and then his brother. They were totally awesome. It’s so exciting being a part of something with so much enthusiasm because they have so many fans. I thought it was awesome."[2]

Andrea von Foerster, music supervisor on Dollhouse, chose Kimberly Cole's song "Superstar (Smash It)" for this episode. Cole was added to the cast later on: "The story is that they actually first chose my song ‘Superstar (Smash it) which is off the EP. We did that one hit song because that was the one I performed on stage. So they ended up choosing my song and that was so exciting. And then from there they actually booked me as an actor on the show."[2] Jean-Yves "Jeeve" Ducornet produced and wrote all songs in the episode (including "Freedom").

"More teething trouble for Dollhouse as the stalker storyline really fails in all departments."
―The TV Critic Review
"My favorite moment in the series so far was Echo’s slight shake of the head at the end of episode three. It was so delightfully understated and raised so many questions. It presented so delicately the moral vacuum that the Dollhouse really is."
―GeekDad's Review 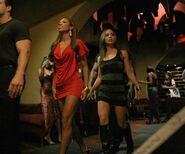