"Needs" is the 8th episode of Dollhouse. It was written by Tracy Bellomo and directed by Felix Alcalá. It aired on April 3rd, 2009.

When Echo, Sierra, November, Victor and Mike awaken in the Dollhouse with their original personalities, Echo leads the charge to free the Actives from their apparent captivity and escape the Dollhouse forever. Meanwhile, Ballard discovers the Dollhouse is closer than he thinks.

Joss Whedon said about the episode: ""Needs" was one of the first episodes that I ever dreamed up. It was one of the first episodes I pitched. Tracy Bellomo wrote such a beautiful script and [director] Felix Alcala just made a beautiful show. Gorgeous to look at and well-paced. Everyone was just firing on all cylinders. And it was like, "This is the kind of story we're trying to tell."[2]

"[T]his is a very compelling episode – one I liked even more than "Man on the Street", thanks to the stronger characterizations."
―IGN Recap

"This is a good episode, it’s an interesting, logical story. It has acting and writing to recommend it. But it still leaves me uncomfortable and without a bond to it."
―The TV Critic Review

"All in all, this was a pretty great episode, even if it lost a little bit of its suspense after we realized this was all just Adelle's game."
―io9 Recap

"Complete with lots of humor, intimate romance and twists and turns aplenty, "Needs" is another example of the potential "Dollhouse" has in its serialized form."
―Airlock Alpha Recap 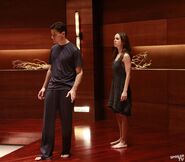