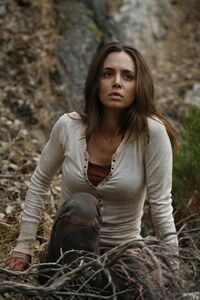 Jenny is one of the identities taken by Echo. She is a dream date for her client Richard Connell. She displays some amount of survival skills and has an imprint for firearms. Her only mention of her false history is that she had four brothers before her, and none of them were democrats.

In "The Target", after Connell had sex with Echo, he gives her a five minute head start and goes after her with a bow. He later explains his actions by claiming to want to know whether Echo deserves the right to live. It is also in this active imprint that she displays her residual imprints, one of them was her past identity Caroline, and other past imprints that Topher applied to her prior to the episode. In Jenny's persona, Echo deeply remembers Alpha's composite event and the memory of dead actives around her. She also goes beyond her imprint when she refuses Boyd Langton's reassurance of their being hunted by Connell. In the end she kills him and earns, as he dies, his respect.