This article is about the character. For the original pilot see Echo (episode).

"I remember everything. Sometimes I'm someone else and then I come back, but I still feel them. All of them. I've been many people. I can hear them, sometimes suddenly. I'm all of them, but none of them is me. Do you know who's real?"
―Echo to Ballard, 2x01 Vows

Portrayed by Eliza Dushku, Echo is the main character of Dollhouse. She is one of a group of men and women who can be imprinted with identities, personalities, skills, and memories in order to be sent into the world on engagements. Between engagements they live in the Dollhouse with no memory of their pasts or knowledge of their futures. Echo is the only Active in existence who not only began to grow self-aware in her "tabula rasa" state, but also pieced together a full, working self and became an actual person who could no longer have her memories erased.

At first a mysterious figure known only as the past life of Echo before she was brought to the Dollhouse, Caroline Farrell's life, history and motivations are slowly revealed over the course of the series through a series of both flashbacks and unlocked memories.

Caroline was an innocent college student, a normal, carefree girl who attended Freemont College in California. After growing up and also attending an influential class, Caroline becomes an activist for both animal and human rights. Fearing the possible rights violations perpetrated by the Rossum Corporation, Caroline and her boyfriend Leo broke into the Rossum lab and filmed damning footage, where they discovered that Rossum was not only performing illegal animal testing but was also experimenting on human brains and even human fetuses.

When they were caught by security, Leo was shot but escaped with Caroline, eventually dying in front of the building as soon as they get out. Somehow after this, Caroline ends up in a hospital. At the hospital, where she would not speak, Adelle DeWitt came to see her, assuming that Caroline was just another person that DeWitt could dupe into joining the Dollhouse. Caroline, however, overhearing DeWitt's conversation with her doctor, escapes out of a nearby window. ("Echoes")

For more than a year, Caroline stayed on the fringes of Rossum, gathering information and hurting them where she could. According to DeWitt, during this time Caroline left a "trail of bodies" as well as other damage that could be blamed on her. Caroline became a much colder person during this time, obviously trying to avenge Leo's demise. At one point, she seduced a security guard and used him to sneak into DeWitt's office, where she locked up the guard and found a file on both herself and Bennett Halverson, a rising star in a Rossum-funded college. There, Caroline saw her first video footage of the Dollhouse beneath the building, and vowed that she'd find a way to get inside. At this time, she casually refers to herself as a "terrorist."

(Also, apparently by now Caroline has a safe place built for herself in the mountains in an undisclosed location, referred to first in "Gray Hour" but repeatedly over the series.)

Over the course of the next few months, Caroline gets into the University of Tucson, Arizona, where Halverson is attending college, and finds that Bennett Halverson is a shy science nerd who isn't evil at all. She befriends her and encourages Bennett to take the job with Rossum, as Caroline knows that Rossum's central headquarters is located in Tucson. When Bennett discovers Caroline's duplicity, she also learns of Rossum's casual evils in the name of science, and so vows to help Caroline take them down. At this time, DeWitt and her head of security Laurence Dominic discovered Caroline's security breach, and headed to Tucson to intercept her.

At the Tucson headquarters, Bennett accesses a computer to help Caroline get through the tunnels beneath the building to lay explosives, with the intent of bringing down the entire building. However, in labs not included in the schematics, Caroline finds human subjects being put through rudimentary tests of Active technology, such as being forced to sing opera on command, or having their brains lobotomized on tables. Those who weren't being cut into were kept in glass cases on the walls. Despite Bennett's urging, Caroline tries to abandon the mission and save them all, forgetting that the bombs she's planted are time-locked.

The bomb explodes as Caroline tries to escape and Bennett tries to save Caroline. When Caroline finds Bennett's left arm crushed beneath a concrete pylon, she tries to save her friend. But a security feed nearby shows her that DeWitt and Dominic are in the building and heading for them, so she swipes a security card off of a nearby body and plants it on Bennett, insuring that Bennett would get off free and Caroline would be the only one caught. DeWitt and Dominic capture her, but are forced to send her up to the top of the building, where Caroline meets the head of the Rossum Corporation and his right-hand man. ("Getting Closer")

After this, she is taken to the Los Angeles Dollhouse, where DeWitt informs her that the past last two years of her life are "a mess" and that her "actions have consequences." There, Caroline finally signs away her freedom and is taken to the Dollhouse below, where she notes that the dolls look like "zombies." Topher Brink wipes her memories away, and Caroline becomes Echo. ("Omega")

In the pilot episode, FBI special agent Paul Ballard has been assigned with investigating the Dollhouse, and a mysterious source sends him a picture of Caroline with her name on the back. This, coupled with video footage of Caroline before she became entangled in Rossum's schemes ("Gray Hour") spur him on to find the Dollhouse and save Caroline, who is the only tangible proof he has of the Dollhouse making someone disappear.

In "Needs," Echo, along with three of her fellow "glitching" dolls who have all shown signs of increased memory, is allowed to wake up as Caroline with none of Caroline's memories in order to find closure. Caroline escapes, but returns to the Dollhouse in order to free all of the dolls inside, regardless of their mind-wiped state. DeWitt allows this so that Caroline will be returned to her state as Echo, but she states that Caroline was "never very realistic." In direct contrast to this, Caroline actually calls Agent Ballard from Dr. Claire Saunders' office, telling him that the Dollhouse is underground.

In "Omega," Caroline comes face-to-face with Echo, and they agree that a contract can't allow slavery, but their plans to reunite are cut short by Alpha. Over the course of the second season, as Echo becomes a full, complete person, she begins to question Caroline's actions more and more, finally admitting that she is scared of Caroline, because Echo doesn't know whether or not putting Caroline's personality back inside of her will wipe Echo away. Finally, she even admits to not liking Caroline based on what she knows about her; however, at the end of "Getting Closer" Echo accepts that she has no choice and downloads Caroline's memories into herself, though what effects this will have on Echo have yet to be revealed.

Throughout The DollHouse Series[edit | edit source]

In the possible post-apocalyptic future shown in "Epitaph One" displaying what the world would be like should the technology of the Dollhouse ever be abused, Echo has been permanently restored to her Caroline identity and Caroline now works as a freedom fighter. In addition, the Caroline personality is also in operation in at least one other body than Caroline's own. The details of Echo's restoration are not made clear, nor is the exact nature of her relationship with Paul Ballard. When asked if they are still "together," Caroline shrugs and replies,"Jury's out on 'together.' He's got my back, though." Caroline is seen as something of a symbol of freedom to the characters of that future, and they spend the majority of the episode trying to find the stored copy of her personality so that she can lead them to "safe haven." 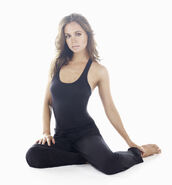 Echo Promotional Photo
Add a photo to this gallery

Retrieved from "https://dollhouse.fandom.com/wiki/Echo?oldid=15292"
Community content is available under CC-BY-SA unless otherwise noted.