This is a summary of Dollhouse's Ratings.

The first three columns depict the Rating and Share of the first US-airing, with "Live+SD" denoting that the numbers take live viewers into account, as well as DVR-viewings that happened on the same day of the broadcast. The three columns showing total viewership break it down to live viewers, Live+SD viewers and Live+7 viewers, i.e. live viewers plus seven days of DVR-viewing. The final column shows the Rating/Share in the important demographic of 18-49 year-olds after seven days of DVR-viewing.

The small numbers in parentheses denote the weekly rank of that data entry in comparison to all TV shows aired during that week. 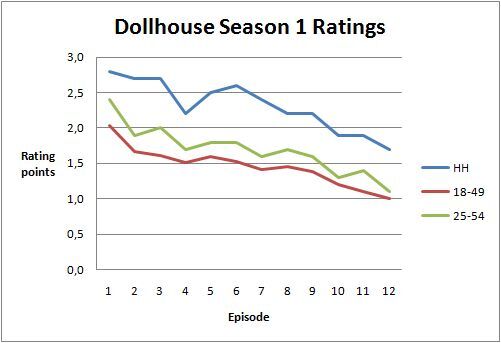 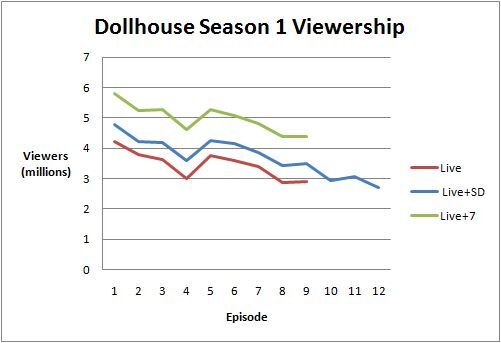 Taking into account the Sci Fi+1 timeshift service, the first season averaged 320.000 viewers. The following table shows the viewers for the regular airing and the first timeshifted airing on Sci Fi+1 (along with its weekly ranking for the network). The "Viewers (regular + first timesfited airing)" column displays the sum of the first two, but it does not reflect the total viewers for an episode since Sci Fi UK repeated episodes more than once during the week.

Retrieved from "https://dollhouse.fandom.com/wiki/Dollhouse_Ratings?oldid=13673"
Community content is available under CC-BY-SA unless otherwise noted.